THE CONSTITUTION AND RULE

OF THE SCOTTISH GUILD OF SERVERS

To the server is given the privilege of ministering like Samuel of old, in the Sanctuary. The Server should value this honour and ever strive to become more worthy of it by performing every duty with recollection of the Unseen Presence to Whom such service is rendered.

In order to attain this ideal the server should endeavour to be to the congregation an example of carefulness in observing, so far as able, the precepts and rules of the Church; using the sacraments frequently and with devotion, due preparation and thanksgiving; with application to prayer and meditation, and to a greater realisation of the boundless Love of God.

The Scottish Guild of Servers is an association of those whose office it is to serve in the Sanctuary. It sets forth for its members high ideals, realising that One alone, who took upon Him the form of a servant, manifested perfection in humanity. We, His servants, fall short of the ideals set before us. Bearing these ideals in view, the Guild forms a corporate means by which the individual server may endeavour to follow them. Its aims, drawn up to further this endeavour, are these:

(a) To foster devotion, individual and corporate, and so to deepen the spirit and power of worship in those who serve in the Sanctuary.

(b) To promote an orderly and conscientious discharge of their duties among the members of the Guild.

(c) To encourage more frequent attendance at the Holy Eucharist, in addition to times of duty.

(d) To encourage servers to meet for the purpose of devotion, instruction and fellowship.

(e) To provide for those who desire it, simple instruction and guidance in the Spiritual Life.

In addition to the Rules laid down in each Church according to local custom and needs, the Guild requires that all members should keep two in common:-

(a) To say the Guild Prayer on Sundays and greater Festivals.

(b) To say an Office of Preparation and Thanksgiving before and after serving.

In order that none may be admitted to membership without having carefully considered these matters and without having had experience in the duties of the office, an applicant should have been serving for a probationary period of at least six months, unless the applicant’s Rector sees fit to recommend a shorter period before admission. A formal application for membership should be sent to the Secretary-General with a recommendation from the Rector or Chaplain of the church at which the applicant is a server. After the application has been approved the applicant may then be admitted according to the Form provided, and invested with the Guild Medal by a Chaplain of the Guild or a Priest authorised by the Council.

Servers, if thought appropriate, may be enrolled as Probationer-Members of the Guild, in which capacity they must serve for at least six months, after which, if they so desire, and their Priest approves, they may be admitted to the full membership of the Guild. They should be admitted by their Priest at meetings of the Priory and formally robed with a cotta or surplice. Two rules are laid down for them: to attend Priory meetings and to make it their aim to worship at the Eucharist each Sunday. As a token of their Probationership a certificate shall be given to them. Applications for these token cards, together with the names and addresses of the candidates, should be sent to the Secretary-General.

While the Guild is essentially a society for those who are engaged in the service of the Sanctuary, it could not function without the guidance, sympathy and encouragement of the clergy. In order to further this, Bishops, Priests or Deacons may be enrolled as Associates on assenting to the aims and ideals of the Guild.

In order that the Almoner of the Guild may have funds with which to defray the necessary expenses of the administration of the Guild, each applicant for membership is required to pay an entrance fee to cover the cost of the medal and manual, and so far as able, who ought to help to provide the money required.

So that it may be realised that the Guild is concerned more with spiritual things than with worldly, the Group of members at each Church shall be known as a Priory, where at least three servers are included. Smaller branches may be attached to the nearest Priory or Fraternity, or direct to the Council as circumstances may decide.

The Rector shall be the Chaplain of the Priory or the Rector shall appoint another priest in the congregation to be Chaplain. One of the adult members over eighteen years of ageshall be appointed Prior.

The Prior should not simply be a local Secretary, but should consider that there should bea responsibility, spiritual as well as official, for the well being of the Priory. The Prior should report to the Secretary -General any changes or removals in the Priory; forward new applications for membership; be responsible for the money collected towards the Guild funds and send it at the due time to the Almoner.

Where a large Priory of over twelve members is formed, other offices may be found of advantage, such as Sub-Prior, Novice Director or Sacristan, in order to invest members with a sense of responsibility.

The larger fellowship among servers which the Guild seeks to encourage in its Objects is met by the association of groups of Priories. Two or more such Priories may form a Fraternity, meeting together from time to time for the purposes of devotion, instruction and fellowship.

A priest shall be appointed as Director of the Fraternity and shall preside at meetings.

The Secretary-General must be notified forthwith of the appointments of Guardians, Alternate Guardians and Priest Directors.

The affairs of the Guild as a whole shall be entrusted to the Warden, Chaplain-General, Secretary-General and Almoner, who together with any Past Wardens, the Guardians of the Fraternities and six members of the Guild, three of whom shall be nominated by the Council and three members elected at the Annual General Meeting, shall form the Council. The members of the Council with the exception of the Past Wardens and Guardians will hold office for three years and each year one Council appointed lay member and one elected lay member shall retire. Names and profiles of candidates for elected lay members shall be lodged with the Secretary-General on the appropriate form one month before the Meeting. If insufficient members are elected the Council shall have power to co-opt or not for one year only. Each year not more than two of the Warden, Chaplain-General, Almoner and Secretary-General shall be appointed. Nominations for these shall be made by the Council, but Fraternities may submit names to the Secretary-General not later than one month before the date of the General Meeting, at which the elections shall be made. All Council members shall be eligible to be re-appointed or re-elected as appropriate. The quorum for a meeting of the Council shall be six.

A Priest shall be appointed as Warden, who shall guide the Council in spiritual matters and preside at its Meetings and General Meetings of the Guild.

On retiral, the Warden may be appointed as Past Warden in order that the Council may continue to benefit by the Warden’s advice and experience.

This office shall be held by a Priest, who shall preside at Meetings in the absence of the Warden, and shall be consulted in matters concerning the administration of the Guild.

The Almoner who shall be a member of the Guild shall be entrusted with all funds belonging to the Guild, of which the Almoner shall render an account annually to the General Meeting. The accounts shall be inspected by an Independent Examiner appointed by the Council. The Almoner shall have authority to disburse funds between Council Meetings as agreed for routine or urgent expenditure.

The Secretary-General shall be a member of the Guild, whose duty it shall be to keep the Minutes and Records, deal with applications for membership, and such matters as the Council may depute from time to time. To assist the Secretary-General to perform the duties of the office the Council may appoint i) a Membership Secretary ii) a Sales and Stock Officer iii) a Newsletter Editor iv) a Guild MC v) any other assistant as required. These shall be invited to attend Council Meetings as required but are non-voting members thereof.

Honorary Councillors may be appointed in recognition of their work for the objects of the Guild, on the recommendation of the Council, endorsed at an Annual General Meeting.

In order to safeguard the stability of the Constitution and Rule, any proposal to amend it shall be dealt with as follows:

(1) Any individual member of the Guild may make such a proposal, or it may be initiated by the Council.

(2) The proposal must be sent in writing to the Secretary-General at least one month before an Annual General Meeting and its terms notified and circulated with the agenda of that meeting.

At any meeting of the Guild at which a vote is taken, the right to vote is strictly limited to full members and Associate clergy whose names are recorded on the Guild Roll.

If the Council determines that it is necessary or appropriate that the Guild be dissolved, it shall convene a meeting of the members; not less than twenty-one days’ notice of the meeting (stating the terms of the proposed resolution) shall be given.

If a proposal by the Council to dissolve the Guild is confirmed by a two-thirds majority of those present and voting at the general meeting convened as above, the Council shall have power to dispose of any assets held by or on behalf of the Guild- any assets remaining after satisfaction of the debts and liabilities of the Guild shall be transferred to some other body or bodies having objects similar to those of the Guild, which failing to the General Trustees of the Scottish Episcopal Church. 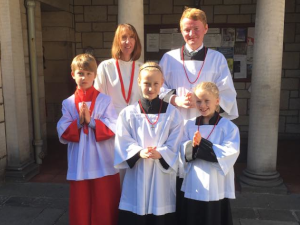 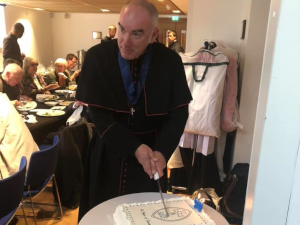 Member of the worldwide Anglican Communion.